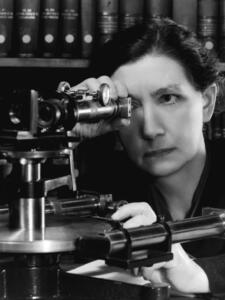 Estelle Glancy earned a BA in astronomy at Wellesley College in 1905. Wellesley, like Vassar, had a strong astronomy program. Glancy received her PhD in astronomy from UC Berkeley the same day as her roommate, Phoebe Waterman, in 1913. Graduate study at Berkeley was serendipitous. When she failed to find a job, Glancy explained: “After an idle period of nearly a year and no success in selling my poor talents at an eastern observatory, I launched a far distant appeal to the Berkeley Astronomical Department …I was invited to come as a computer provided I would also work toward a PhD degree; a thought which would never have entered my mind.”[1] She arrived in 1906 shortly before the San Francisco earthquake and fire. 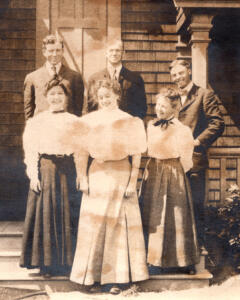 Glancy’s research advisor, Armin Leuschner, called her “brilliant, industrious and accurate.” Like Waterman, she was a fellow at the Lick Observatory, where a record of her observer’s notebooks and instrument logbooks are archived.[2] According to Lick archivist Tony Misch, Estelle Glancy is considered the first woman to do her own research at Lick.  Her groundbreaking achievement “was the splendid series of glass-plate photographs she made from Mt. Hamilton of comet Morehouse in 1908 using the Crocker telescope.”[3] After earning her PhD, Glancy could not find a position as an astronomer in the United States, so she traveled with Phoebe Waterman to accept a position as an assistant astronomer with the Argentine National Observatory. She was considered by W.W. Campbell for the position of director of the southern observing station in Santiago, Chile, but as one recommender wrote “Too bad A. E. Glancy has not Alfred instead of Anna as her first name.”[4] Glancy remained for four years but with the onset of World War I she returned to her native New England. Still finding no position in astronomy, Glancy decided to migrate from astronomy to optics and “start from scratch.” She spent the rest of her career as a successful geometric research optician at American Optical Company in Southbridge, Massachusetts.  Like other female employees, she first functioned there as a computer.  “I had no illusions about the difficulty of transfer from Astronomy to Optics but knew also that there was no better background than computing in astronomical problems. So I elected to start once more from scratch. Trigonometry, calculus, the art of computing and something, which is best called insight, which developed under the inspired teaching of Professor Leuschner, was my stock in trade. In exchange, the new job could give me association with top-flight leaders and a chance to grow….” 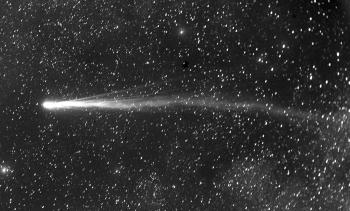 Comet Morehouse (aka 1908c) photographed by A. Estelle Glancy from Mount Hamilton using the Willard lens on the Crocker Telescope, November 14, 1908; scan from the original glass-plate negative, courtesy of UCO/Lick Observatory

Her boss at American Optical for 33 years was a former astronomer, Dr. E. D. Tillyer, widely known as a leading lens designer.  During WWI American Optical was requisitioned to fill large military orders for lenses, which were calculated by Glancy. In her role as a geometric optician, she worked on numerous lens designs and was responsible for performing the complex mathematical calculations involved in ophthalmic optics.

“When the war ended, I began the long and repetitious calculations on which the Tillyer spectacle lens is based. In principle, this lens aims to give marginal vision as nearly like vision through the center of the lens as possible. The larger part of ten years was occupied in this major project which no other company than the American Optical Company was ready to undertake.”

A decade of mathematical calculations was essential to the Tillyer corrected curve lens, to which Estelle Glancy’s name should have been appended.  Glancy was awarded a patent in 1923 for her design of the first progressive lens for eyeglasses, an impactful innovation to correct for near and distant vision as an alternative to bifocal and trifocal lenses. She also designed lenses for microscopes, cameras and military optics. Between 1929 and 1945 Glancy received thirteen patents for her innovations. Glancy was the first among her Berkeley women peers to find employment in industry, but she continued to write astronomy papers with her advisor Armin Leuschner.[5] As of 1950, Glancy was the sole woman lens designer in the world. In retirement she cited her progressive deafness as a factor in her success. “The forced aloneness which deafness imposes was compensated in part by freedom from distraction and the ability to concentrate.” She modestly concludes the account of her career: “Opportunity knocked at my door….”