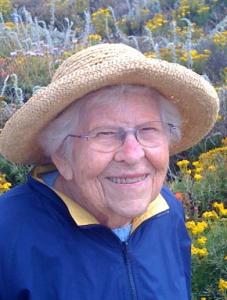 Cecile Trumpler Weaver (1918-2020) graduated in 1939 with a degree in astrophysics from UC Berkeley. She was the daughter of Robert Trumpler, a faculty member in the Department of Astronomy at UC Berkeley. She was born in Pittsburgh (PA), and moved to Lick Observatory on Mt. Hamilton when she was 2 years old, when her father was appointed to the Berkeley Faculty. She attended the one-room school on Mt Hamilton until the 6th grade. She then lived for 2 years with her grandmother in Lausanne (Switzerland), her parents’ home country, where she attended high school. She finished high school in Berkeley (University High, 1935), before enrolling at Cal, where she received her degree in Astrophysics (1939). While at Cal, she met and married fellow astronomy student Harold F. Weaver, who himself was later appointed to the Astronomy Faculty at UC Berkeley, after obtaining his Ph.D. under Robert Trumpler. While at Cal, Cecile calculated stellar orbits by hand.

Although Cecile did not continue in Astronomy, she always remained extremely interested in the field, while taking on a variety of other jobs during her long life. For example, after receiving one of the first Certificates of Religious Education from Starr King School for the Ministry, she became the religious education consultant for the Pacific Coast Unitarian Universalist Council. In 1968, Cecile earned a Masters in Social Welfare at UC Berkeley, and founded the Children’s Center in Berkeley to help troubled families. In 1972 she started with the Towne House Creative Living Center in Oakland and became its first director, where she developed a program to help people with mental illness. She later developed similar programs throughout Alameda County. At age 70, Cecile volunteered at the UC Botanical Garden, where she stayed for 25 years, leading tours, scheduled volunteers, and was a carnivorous plant propagator. Meanwhile she began auditing classes at UC Berkeley in geology and planetary sciences, for which she received an (unofficial) “honorary” degree in geology. She was also active with the Chabot Science Center, organizing monthly enrichment lectures for the docents and supporters.