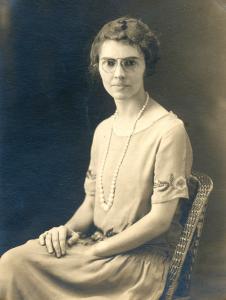 Charlotte Emma Moore (Sitterly) (1898–1990) earned a PhD in astronomy from Berkeley in 1931. Although Berkeley is proud to claim her as an alumna, Charlotte Moore spent most of her career at Princeton. Following graduation from Swarthmore College in 1920 as a math major and with no prior experience, Moore was employed as a computer to process astronomical data. Moore’s job was to calculate the positions of celestial bodies for a prominent astronomer, Henry Norris Russell, at the Princeton Astronomical Observatory. In 1925 Moore started a study of the solar spectrum. She spent two years in California working at the Mount Wilson telescope but found she was given more responsibility at Princeton with Russell. “But at that time there were not too many chances for any woman, no more chance there for a woman than there was at Princeton and I felt that I had more opportunity to get into general astrophysics with Dr. Russell than I did being channeled out there as a computer. There was little opportunity to broaden or advance.” Moore attended graduate lectures at Princeton, but she was unable to enroll for graduate study there because Princeton did not accept women at that time. “Princeton wouldn’t have anything to do with women under any circumstances. I could get no credit there whatever. There was no way.” While Russell was on a two-year trip to Europe, Moore came west to Berkeley, where she completed her PhD with a thesis on sunspot spectra in 1931.

While working on her PhD, she continued researching spectroscopy and collected and analyzed data about the spectra of chemical elements and molecules. After obtaining her degree, Moore returned to Princeton to continue to work as a researcher with Russell until his death. In 1937, Moore presented a paper at the American Astronomical Society announcing her discovery of three new elements in the sun. After an evening of stargazing, she accepted a proposal of marriage to a Princeton colleague, astronomer Bancroft Sitterly. Moore continued to publish under her maiden name; she coauthored The Masses of the Stars with Russell in 1940. She spent the rest of her career as head of spectroscopy at the National Bureau of Standards in Washington, DC, in charge of an atomic energy levels program. One of her foundational contributions was the compilation of tables of atomic spectra, a lasting contribution to astronomy. She described her work modestly in a 1961 interview: “It isn’t glamorous, but the work itself carries you along on its own interest.”