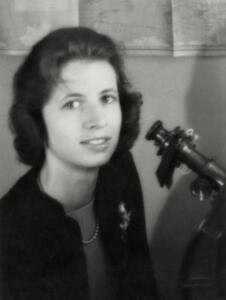 Born in East St. Louis, Missouri, Dorothy Davis was a precocious student. In high school she stood at 6’4” and broke a world track record for the standing broad jump. After finishing high school in three years, she entered Vassar in 1929 and majored in both physics and astronomy. Two of her Vassar professors were Caroline Furness, mentor to Phoebe Waterman, and alumna Maud Makemson. Davis was admitted to the graduate program in astronomy at UC Berkeley but could not afford to attend. Fortunately nearby Mills College in Oakland offered her a one-year teaching fellowship and the chance to earn a master’s degree, for which she wrote a thesis on S-type stars. While teaching at Mills, she conducted research at the Lick Observatory, guided by Berkeley professor Donald Shane. The next year Davis received an assistantship from Berkeley and entered graduate school. She wrote her thesis on the spectrum of Antares and became an expert on molecular spectra. On completion of her PhD in astrophysics in 1937, Davis taught briefly between 1937-1939 at Vassar and at Smith. When she won an American Association of University Women Postdoctoral Fellowship, she was able to return to her real interest, which was research, at Mount Wilson Observatory. In 1940 she was invited to Princeton to assist astronomer Henry Norris Russell, in his work on the spectrum of ionized europium . During World War II, Davis contributed to the war effort by working on weapons programs and a rocket project at Caltech. In 1943 she married a Caltech student, Bart Locanthi, who was assigned to the same project. After the war, he took a job at Beckman Instruments to help support her husband through school. she interrupted her career at several points to rear children. When her first child was born in 1945, Locanthi dropped out for two years. With the birth of two more children, she stayed home for a decade. Locanthi held a series of half-time jobs at Caltech and Jet Propulsion Laboratory. In 1962, she returned to the labor force at Cal Tech, working on the derivation of stellar abundances. In 1972 she took a position at Jet Propulsion Lab in the planetary atmospheres section. She retired in 1985, but continued working, attending scientific meetings and presenting papers.[1]