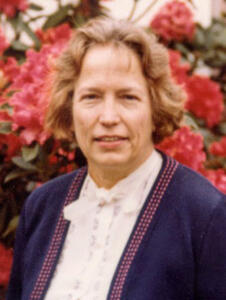 During the late 1940s and early 1950s Berkeley granted doctoral degrees in astronomy and mathematics to several women whose studies were significantly interrupted by World War II. Among them were Elizabeth Leonard Scott, Evelyn Fix, and Julia Robinson. Elizabeth Scott, known as Betty, grew up in Oakland and graduated from Berkeley in 1939 with a bachelor’s degree in astronomy. Her family moved to Berkeley specifically so that their children would attend UC Berkeley, with free tuition. At the age of twenty-two Scott wrote her first research publication, about comets. Scott was recruited by Professor Jersey Neyman to help with the war effort in his Statistics Lab. Scott went on to earn a PhD in astronomy from Berkeley in 1949. Advised by Robert Trumpler, she wrote a thesis in two parts. Part I was on “Contribution to the Problem of Selective Identifiability of Spectroscopic Binaries” and Part II was on “Note on Consistent Estimates of the Linear Structural Relation Between Two Variables.”

In 2017 a former student, Professor Amanda Golbeck (biostatistics), wrote an extensive biography of Scott: Equivalence: Elizabeth L. Scott at Berkeley.[1] Scott’s maternal aunt astronomer Phoebe Waterman Haas (profiled above) was undoubtedly an influence. Thirty-five years older than Scott, Haas saw her niece periodically at summertime family gatherings near Annapolis, Maryland. Scott was aware that Waterman was a pioneer whose marriage deterred a professional career in astronomy but who had resolutely continued her work as a variable-star observer. Scott was reluctant to credit her aunt directly: “It is very hard for me to say how much she influenced my going into Astronomy. Certainly, indirectly but not much directly.” Golbeck questions why Scott may not have wished to acknowledge Waterman’s influence. Scott acknowledged that she sometimes discussed astronomy with her aunt, but not until she was studying astronomy as a Berkeley undergraduate: “My mother’s oldest sister had a doctorate in astronomy, but I knew her only as a friendly aunt whose children we played with. She was no longer active in astronomy…. We never talked about astronomy before I was in college, but I did know that astronomy existed and that there were women astronomers.”[2] 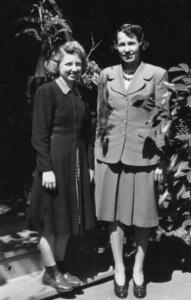 Scott realized that because of discrimination, since women were barred from the use of certain large telescopes, she would have more research opportunities as a mathematician and statistician than as an astronomer. She explained her reasoning: “Well, it is not too often that you can actually put your finger on a discrimination, and you know that you really can prove that it was there. There was no secret about it. Women were not allowed to use the big telescopes at Mt. Wilson, the 60-inch and 100-inch. Women were not on the staff. There are no women on the staff at the Mount Wilson and Palomar Observatories. … It was just forbidden. That went on for many years.”[3] She was appointed assistant professor of mathematics in 1951 and left to join the newly formed Statistics Department at Berkeley in 1955-56. She served as chair of Statistics from 1968-73. However, Scott never abandoned her interest in astronomy, and between 1949-1964 she published over 30 additional papers in astronomy. Scott applied statistics to solve research questions in astronomy.

In 1957, Scott identified a bias in the observation of galaxy clusters, realizing that distant clusters could only be found if they contained brighter-than-normal galaxies, as well as a large number of galaxies. She submitted a formula to correct for what became known as the Scott effect. Scott’s earlier papers focused on the use of statistical tools to answer important questions in that field, followed by a shift to work using astronomy as the motivation for and application of statistical ideas.

“This series of papers centered on the premise that the universe and its elements were products of random processes. Later papers extended the ideas about distribution of galaxies to more than two regions in space, regions that may or may not be disjoint, as well as extensions to many other statistical properties.”[4]

Scott also worked in other areas of statistics. She wrote over 20 papers on cloud seeding, analyzing weather modification research particularly rain stimulation in the 1960s and 1970s. Another focus was the relationship of ozone depletion and skin cancer, research undertaken with an interdisciplinary team.

In the 1970s, Elizabeth Scott carried out rigorous studies on salary disparities between men and women faculty at UC Berkeley and nationwide. With anthropologist Elizabeth Colson, Scott co- chaired a subcommittee of the Berkeley Academic Senate, which published a comprehensive 78-page study of the status of women faculty and graduate students in academia at Berkeley.[5] This extremely consequential report examined not only salary and benefits but also hiring, rates of promotion and tenure, research opportunities and committee appointments, and propelled the drive to hire women in the 1970s. “Considerable disparities in treatment were documented and Scott promptly turned her attention to finding remedies. What Scott was doing here was unique. While most faculty women spent their time simply turning out evidence that they were paid less than their male counterparts were, Scott was collaborating in studies, employing multiple regressions that soon were used by universities in making salary adjustments and came to be widely accepted as evidence in lawsuits. Her work on this topic earned Scott a reputation as Berkeley pioneer in applying statistical methods to research on the status of academic women.”[6] The Elizabeth L. Scott Award was established in 1992 to recognize Scott’s lifelong efforts to advance the careers of women in academia. Scott’s legacy at Berkeley lives on: Berkeley Statistics Professor Bin Yu won the Scott Award in 2018, as did her biographer Amanda Golbeck in 2012.[7] During the 150W celebration of women Elizabeth Scott has been the subject of a talk by her biographer, Professor Amanda Goleck and profiles in the departments of Statistics, Mathematics, and Computer Science Society webpages.