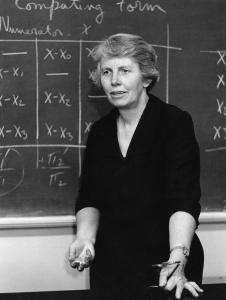 Helen Pillans (1909 -1984) was a visionary scientist who foresaw the need for college women to study computer science, and acted on that conviction. She and her mother moved to Hawaii after her father died when she was 8, and Helen became fascinated by the stars in the night sky. At age 13, Pillans asked her mother what the sun was, and was shocked to find that she did not know. She attended the University High School in Oakland and graduated from the Anna Head School for Girls. She earned a bachelor’s in 1932 and a master’s degree in astronomy in 1933 from the University of Chicago. As was typical of women with advanced degrees in science, Pillans was hired by three colleges for women. At Hollins College, she was an instructor in physics and astronomy from 1936-42. Mount Holyoke, where she taught astronomy from 1942-1947, had a strong astronomy program led by women, thanks to the Williston Observatory built in 1881. Thirteen years after earning her master’s degree, Pillans returned to California to enter the astronomy PhD program at Berkeley in 1947 and was awarded her doctorate in 1952. While a graduate student, she published articles in 1944, 1947, and 1947 on “Occultation of Stars by the Moon” with her Mount Holyoke collaborator, astronomer Alice H. Farnsworth, who directed the Williston Observatory.

Helen Pillans spent the rest of her career at Mills College from 1957 until her retirement in 1974. At Mills Pillans taught physics and mathematics during the academic year, and astronomy during January term. She spent seven summers as Visiting Associate Professor of Astronomy at UC Berkeley from 1964-. Despite a full teaching load, Pillans continued to write scientific papers through the 1950s for the Astrophysical Journal and Publications of the Astronomical Society of the Pacific. She rose to full professor at Mills, where she was known for her innovative views on education, brilliant teaching, and rapport with students. In 1959 Pillans wrote “Elementary Astronomy” co-authored with Berkeley colleague Professor Otto Struve and astronomer Beverly Lynds, a 1955 Berkeley PhD. This book was intended as general background in astronomy for students studying physical science without mathematical training, and deemed very easy to read and very thorough. Professor Pillans was enthusiastic about engaging the public and lectured widely on astronomy.

“Computers are revolutionizing our whole society and changing our approach to science.”

Helen Pillans was ahead of her time in realizing the power of computers. She used one for her dissertation research. In her 1965 article, “A Computer at Mills College?” Pillans explains to Mills alumnae in the evolution of computing in higher education since 1950 and its ubiquitous applications. Calling computers “tools to amplify our intellect,” Pillans introduced computing into both science and math courses but also fine arts. She was instrumental in obtaining a National Science Foundation grant in 1968 for Mills to join the regional educational computing network at Stanford. Pillans maintained memberships in the American Association of Variable Star Observers, Sigma Xi, and the Astronomical Society of the Pacific. Always looking ahead, Helen Pillans supported the race to reach the moon which she predicted. “Someday,” she said in 1964, “I certainly would like to go to the moon.”