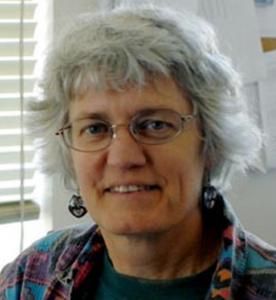 Imke de Pater was the first woman appointed on the Astronomy Faculty, where she quickly advanced through the ranks from Assistant to Full Professor, and finally to “Above Scale,” a rank that is reserved for only the top scientists. She has a joint appointment in the Department of Earth and Planetary Science. She served as the chair of the Department of Astronomy from 2010–2015, while she oversaw the building of our present “new” Campbell Hall. At present she is Professor Emerita and Professor of the Graduate School.

She is a planetary astronomer, using telescopes across the electromagnetic spectrum. For her Ph.D. thesis, she used the Westerbork Synthesis Radio Telescope (the premier interferometer at the time, mid-1970s) to map Jupiter’s synchrotron radiation in novel ways. Not only did she pioneer the “parallel” dipole configuration on the telescope, she also found ways to create maps at all rotational aspects of the planet, despite the fact that Jupiter rotates in 10 hours, and a full (12-hr) synthesis is usually required to map a radio source. The circularly polarized maps made at the time are today still the best of its kind. She then developed a detailed model to simulate the data, which gave insight into both the magnetic field configuration and the spatial distribution of the radiating electrons. Her work was honored in 1984 with the URSI John Howard Dellinger Gold Medal (usually reserved for senior scientists).

We asked Professor de Pater to reflect on her time at Berkeley and her current research.

“I was appointed to the faculty in July 1983. At the time some faculty members wondered what I would do when “I would run out of planets,” a notion that is unthinkable in this era when thousands upon thousands of exoplanets are being discovered. Although I was the only woman on the faculty for 19 years, I never gave this much thought; I always felt very welcome and supported, in particular in the then Radio Astronomy Lab. My time as Chair of the Department, however, was a most challenging period, probably not too surprising in a male-dominated environment.

My research is focused on bodies in our Solar System, using observations at radio, infrared and visible wavelengths. My Ph.D. thesis was focused on radio observations and models of Jupiter’s synchrotron radiation.

You can read more about Professor de Pater’s recent research on the Astronomy website news page .