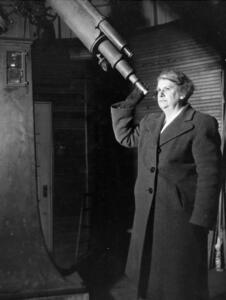 Jessica May Young grew up in St. Louis, Missouri, and earned a bachelor’s in 1914 and master’s degree in 1915 in astronomy and physics at Washington University. She wrote an MS thesis “On the Cause of the non-appearance of certain periodic comets on their predicted returns.” Young enrolled at UC Berkeley to pursue a PhD in astronomy, which she earned in 1920, with a thesis on “The Galactic Rotation Effect in Open Clusters,”about the orbits of comets and binary stars. The fourth woman to earn an astronomy doctorate at Berkeley, Young briefly taught physics and astronomy at College of St. Teresa in Minnesota and at Northwestern University. Returning to Missouri, she was hired as Instructor of Math and Astronomy at her alma mater. Sometimes known as “Mrs. Stephens” after her marriage to Eugene Stephens, a colleague in the math department, Stephens made frequent trips from St. Louis back to Lick Observatory for study and research. In 1923 she was advanced to Assistant Professor of Mathematics and Astronomy, the level at which she remained until she became the first woman in astronomy promoted to Associate Professor in 1952, 32 years after her first appointment. Stephens enjoyed a robust and successful teaching career at Washington 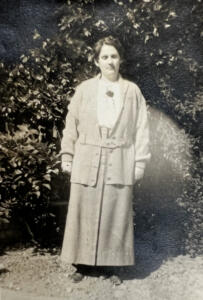 University archives reveal that Stephens promoted appreciation for astronomy through public lectures during the 1940s and occasionally wrote general interest articles for the St. Louis Post Dispatch. In April 1940, for example, Stephens issued a bulletin announcing the spectacular visibility of Venus, Saturn, and Mars. The St. Louis papers reported that Stephens accompanied her students to the campus observatory to view eclipses of the moon in 1942 and 1947. The Business and Professional Women’s Club of St. Louis honored Jessica Stephens in 1952 as one of eight outstanding women “Rampart Builders”. Dr. Stephens retired as Associate Professor Emerita in 1958. To mark her retirement, Washington University hosted a “Tea in honor of Mrs. Stephens.” She accepted one last teaching post in astronomy at North Carolina Agricultural and Mechanical College.