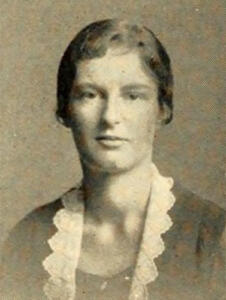 Lois Slocum was born in New Bedford, Massachusetts to a family of seafaring ancestors. She was the niece of Frederick Slocum, a professor of astronomy at Brown University, whom she knew and visited several times as a student. Slocum graduated from Smith College in 1921 in astronomy and earned a master’s degree there in 1924. As a graduate student at Berkeley, Slocum studied the Milky Way galaxy and dark nebulae. She received her doctorate in astronomy in 1930, supervised by Professor Robert J. Trumpler. Her thesis was a study of the colors of faint stars in a section of the Milky Way. Lois Slocum was strongly interested in teaching astronomy. She taught briefly at Wellesley but spent a full decade at Smith, where she was an instructor and assistant professor of astronomy from 1932-43. While teaching at Smith, Slocum continued to publish in astronomical journals. During World War II, she contributed to the war effort at Harvard’s secret Radio Research Laboratory. In 1944 she was appointed professor of astronomy at Wilson College, a college for women in Chambersburg, Pennsylvania, where she remained for the rest of her career. Slocum was an active member of the American Association of Variable Star Observers. Her career was cut short by her early death at the age of 52. Her family established an annual Lois T. Slocum Memorial Lecture at Wilson College. Astronomer Bart Bok (husband of Berkeley alumna Priscilla Fairfield Bok) gave the first lecture in 1952 on “The Depths of the Milky Way.” Bok said, “She was one of the first to demonstrate both the potential power of the color attack and the great difficulties that lay ahead.”[1] Bok praised the significance of Lois Slocum’s research and dedication to teaching until the very end of her life and said that she would have been pleased by his chosen topic, the subject of her own research.