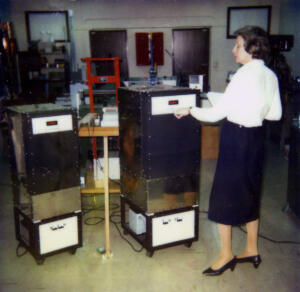 Born in Bethlehem, PA, Martha “Patty” Stahr received a BA from Wellesley College in 1941, majoring in astronomy. Her lifetime interest in astronomy started through a junior high school science club. “I yearned for a telescope of my own,”[1] she recalled. While at Wellesley she built her own telescope with help from the Amateur Telescope Makers of Boston. Stahr earned an MS in 1943 with a master’s thesis on the “A Method of Calculating Curves of Growth” and a PhD in astronomy from Berkeley in 1946. Advised by Robert J. Trumpler, she wrote a dissertation entitled “A Study of the Radial Velocities of Faint F and G Starts near the North Galactic Pole.”

Stahr made observations and measured radial velocities of F and G stars near the North Galactic Pole in an effort to investigate the gravitational force within the Milky Way Galaxy. Stahr also found and measured tilting of the central plane of the galaxy from pioneering radio-wave observations. She was active in the American Association of Variable Star Observers (AAVSO), and contributed 396 visual observations to the AAVSO between 1940 and 1950. 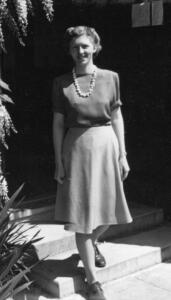 In graduate school Stahr spent 1944–1945 at Lick Observatory, where she used the spectrograph on the 36-inch refracting telescope. She recalled that students would ordinarily never have been allowed to use this instrument, but since it was during war years, “…most of the astronomers had left. There was a discussion as to whether a woman could handle the big telescope, [but] I just went up there. The man was there doing all he could to handle it, and it wasn’t before long that I was doing it with him, so they were very glad that the telescope was kept in use, because it was more than one person could handle.”[2]

Stahr’s first job was teaching astronomy at Wellesley. She required her class in Practical Astronomy to contribute data to the AAVSO. In 1950 Stahr became the first woman faculty member appointed in the College of Arts and Sciences at Cornell University. In 1951 Martha Stahr married Jesse Thomas Carpenter, a labor economist who was 21 years her elder, and went by Carpenter afterwards. For several of her 18 years at Cornell, Carpenter was one of only two-full time astronomy professors. She collaborated with the School of Electrical Engineering project to observe radio waves from celestial objects, such as the sun and galactic center. Cornell established the first research program in radio astronomy at an American university. Carpenter was advisor to eminent astronomer Vera Rubin on her master’s thesis.

In the 1950s and 60s Carpenter published the first-ever comprehensive bibliographies of literature in radio astronomy from all over the world, at a time when such information was not well known. In 1968 she and her husband moved to the University of Virginia to be closer to his family. At UVa she began as a part-time instructor and retired in1985 at the level of associate professor of astronomy. Her research encompassed many areas including variable stars, extraterrestrial radio noise and galactic structure. She served the AAVSO as president for several terms during a turbulent time for the organization, which had meant a great deal to her since college.

Carpenter is also the generous donor who made possible The Robert J. Trumpler Graduate Student Excellence Award at UC Berkeley to honor her advisor.

[1] The quotes and reminiscences of Patty Stahr are drawn from: Kristina Larsen. “Reminiscences on the Career of Martha Stahr Carpenter: Between a Rock and (Several) Hard Places.” JAAVSO Volume 40, 2012, 51
[2] Larsen, ibid.