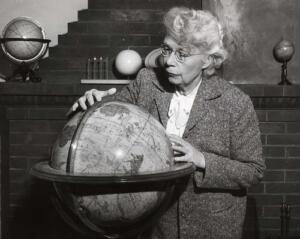 Maud Worcester followed a circuitous route from teaching to journalism to an academic career in astronomy. After attending Girls Latin School in Boston, she studied Greek and Latin for one year at Radcliffe College. Following a brief stint of teaching, she moved to Pasadena, California with her family. Soon afterwards, Maud Worcester married Thomas Makemson and had three children. After divorcing her husband in 1919, she got a job in Arizona as a journalist. There she witnessed the great aurora in May 1921, which sparked her interest in astronomy. Showing unshakeable determination, Makemson enrolled in correspondence courses in trigonometry and astronomy from UCLA and then took science classes in summer school. Finally, she gained admission to UCLA and earned a bachelor’s degree in 1925 at the age of thirty-four. Six years later she received her PhD from Berkeley in astronomy in 1930.

Makemson was appointed to the Vassar College faculty as an assistant astronomy professor in 1932 and was promoted to full professor in 1944. In 1936, she succeeded Caroline Furness as the fourth woman to direct the Vassar Observatory after Maria Mitchell, a somewhat controversial appointment. She was viewed as a “mature” for her rank of assistant professor. Makemson directed the observatory until 1957. She was a mentor to Vera Rubin, Vassar class of 1948, who became an eminent astronomer and made critical discoveries about dark matter. Rubin said of her professor, “She was a very thorough teacher, demanding high quality in return.” With her students, Makemson computed the orbits of twelve minor planets, and named one “Maria Mitchell” and another “Vassar.”

Maud Makemson’s research and publications about primitive astronomy and mythology reflect her broad interests in languages and anthropology. During sabbatical leaves from Vassar and while on a Guggenheim Fellowship, she conducted research in Mexico and published The Astronomical Tables of the Maya (1943). Then in 1954 she wrote an article “Astronomy in Primitive Religion” in which she discussed the worship of celestial bodies in Mesopotamia, China, Egypt, Greece, and Rome.[1] She spent a year in Japan and Punjab on a Fulbright Teaching Fellowship in 1953-54.

After retiring from Vassar in 1957 Makemson taught at UCLA and co-authored Introduction to Astrodynamics, the first text of its kind, with Robert Baker of UCLA.[2] Makemson’s final contributions focused on space research. She moved to Applied Research Laboratories of General Dynamics in Texas as a consultant to NASA on lunar exploration in 1964-65. She found a way to enable astronauts to determine their positions on the moon while they had no access to radar or radio. When Makemson began her research on “Determination of Selenographic Positions,” she did not realize its usefulness. “When I developed an approximate method for determining selenographic latitude and longitude from star altitudes observed from the Moon’s surface, the practical need for such a method seemed most remote. Now, in 1970, a method for finding accurate positions on the lunar surface is… an essential factor in every selenodetic survey.” [3]