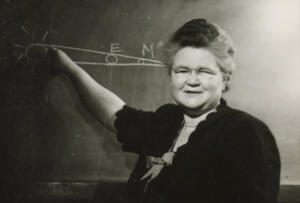 Phyllis Hayford was the youngest of four children of Professor John Hayford, a geodetic astronomer, who was Director of Engineering at Northwestern from 1909-1925. Each of Phyllis’s three older brothers earned engineering degrees, and she followed suit. She graduated Phi Beta Kappa in civil engineering in 1926 from Northwestern University, and then worked for two years as a computer at Lick Observatory. Hayford enrolled at Berkeley in the astronomy doctoral program in 1928 and earned the PhD in 1932. 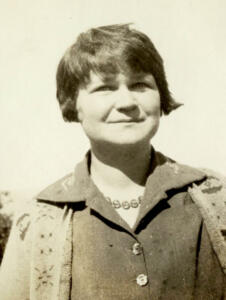 As a Lick Fellow at Mount Hamilton, she conducted research at Lick Observatory for six years through 1937, according to the observatory logs.[1] In 1934 she married a Berkeley math grad student, William Lawrence Hutchings, who earned his PhD in 1935. Facing a two-body problem to secure academic positions, the Hutchings found jobs at Rollins College in Winter Park, Florida, where Phyllis taught astronomy and her husband taught math until 1943. An article in the college newspaper in 1937 reports a public speech she gave about observatories of the West.[2] The couple was then appointed in the astronomy and math departments respectively at Whitman College, in Walla Walla, Washington. Phyllis Hutchings was listed in American Men of Science in 1949, with research interests of galactic rotation, orbit computation, asteroids and comets. Unexpectedly Phyllis Hutchings died at the age of 61. Hutchings’s dedication to teaching was praised by Whitman’s president Louis B. Perry, who called her “one of those rare individuals with tremendous loyalty to her institution and above all to her students. Without question she was among the most beloved members of the faculty at Whitman College and will leave a gap in the hearts of her colleagues and students which will never be filled.”[3]