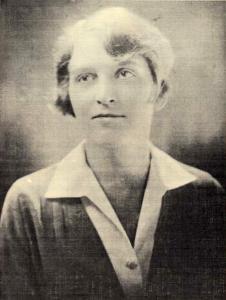 Courtesy of Monterey Institute for Research in Astronomy

Priscilla Fairfield’s career in astronomy is intimately linked with that of her husband, Bart Bok. The daughter of a Unitarian minister, she grew up outside of Boston and was fascinated by the sun as a child. She worked throughout college to pay her tuition at Boston University. It is said that she bribed a nightwatchman to allow her to use the telescope on the roof. At the age of twenty, Fairfield wrote an article on her observations for Popular Astronomy. She enrolled for a doctorate in astronomy at Berkeley, where she was one of the last students of Professor William W. Campbell, Director of the Lick Observatory, and a future president of the University of California. She finished her degree in 1921 and accepted a position as assistant professor of astronomy at Smith College for a salary of $1800. Known in the Smith course catalogue as “Miss Fairfield,” she taught Introduction to Astronomy and Astronomy 11, which required 3 to 4 hours of observing weekly. General Electric had rejected her job application because she revealed her aspiration to be an astronomer. In her nine years at Smith, Priscilla Fairfield advanced to the rank of associate professor.

In 1928 Fairfield traveled to Leiden, The Netherlands, to attend the International Astronomical Society meeting. There she met Bart Bok, a Dutch astronomy graduate student ten years her junior, who was assigned as her host. Bok fell in love immediately. After a year of correspondence, Bok interrupted his own doctoral research in Holland and moved to Harvard. Three days after his arrival, Fairfield and Bok were married. Theirs was a felicitous union, personally and professionally. While Bok rose to full professor at Harvard, Priscilla Bok continued collaborating with him in their research without pay or title for forty years. She stayed home to raise their two children but continued to do research. Women astronomers, mostly faculty at women’s colleges, gathered at intervals through the 1940s, and Fairfield’s name appears regularly as a participant on the rosters of the meetings.

In his oral history, Bart Bok says, “My wife Priscilla did a lot of work at Harvard and didn’t even want a job.” [1] Their scientific achievements are completely entwined. In the Royal Astronomical Society obituary for Bok, the author states “…it is difficult and pointless to separate his achievements from hers.” [2]

The Boks jointly wrote many journal articles on stellar magnitudes, star clusters, and the structure of the Milky Way. The textbook they published in 1941, The Milky Way, was immensely popular and was revised and republished in five subsequent editions and many languages. [3] As galactic astronomy rapidly evolved, they continuously revised the text. The Boks were interested in sharing their discoveries with the public and were called the “salesmen of the Milky Way” by the Boston Globe.

After twenty-five years at Harvard, the Boks left for Australia where Bok was named Director of the Mount Strombo Observatory in Canberra. He installed a new telescope there and a field observatory and initiated a graduate program in astronomy. He had little time for research, but Priscilla Bok devoted herself to nocturnal observations to determine stellar positions, and data analysis during the day. After nine years, the Boks made a final move to Arizona, where Bart directed the Steward Observatory from 1966-1970. Priscilla Bok died in 1975 [4]

The Priscilla asteroid (2137, a Main-belt asteroid), named for her, was discovered on August 24, 1936 by K. E. Reinmuth at Heidelberg, Germany. The Priscilla Fairfield Bok Prize, established in 1966 at the Australian National University, is awarded annually to a third-year female science student. In recognition of their dedication to the public understanding of science, other awards in the name of both Bart and Priscilla Bok have been established by the American Astronomical Society and the Astronomical Society of the Pacific, given at the Intel International Science and Engineering Fair. A recent book entitled Women of the Moon: Tales of Science, Love, Sorrow and Courage (2019) devotes a chapter to the marriage and achievements of Priscilla Bok but adds little to what is already known. [5]