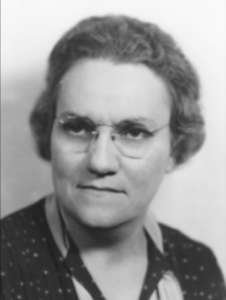 Sophia Levy (1888–1963) was the daughter of California pioneers. Levy developed an interest in astronomy as an undergraduate at Berkeley, where she earned a BS in 1910 and PhD in 1920. For the bulk of her career, however, Levy belonged to the faculty in mathematics at Berkeley., While pursuing graduate study she was hired as an astronomy assistant from 1910-1914. After that she worked in two administrative posts, assistant to the dean of the Graduate Division and Secretary to the California State Board of Education for the Commission of Credentials. She was appointed as astronomy instructor in 1921. Levy contributed many papers in theoretical astronomy. Because of her ability in mathematical analysis, she was hired as an instructor in mathematics at Berkeley in 1923. Eventually Levy rose to full professor of mathematics in 1949, twenty-six years later. During World War II, Levy directed the mathematics instruction for the Army Specialized Training Program at Berkeley.[1] She taught courses on antiaircraft gunnery and even published a text, Introductory Artillery Mathematics and Antiaircraft Mathematics.[2]Levy was deeply committed to improving the quality of mathematics instruction at the secondary school level, and assumed leadership roles in the training of math teachers and prospective teachers. She advised the state of California on math curriculum for the California Committee for the Study of Education in California public schools. She served as chair and sectional governor of the recently organized Northern California Section of the Mathematical Association of America. In 1941, the Northern California and Southern California Sections established a Joint Committee on Mathematical Education under her chairmanship “to study means of strengthening the program of mathematics in schools and colleges.” Levy developed a summer session for math teachers to meet state requirements and published articles The Mathematics Teacher on the teaching of mathematics in the schools.[3]

Levy chose to defer her marriage to a colleague in the math department (John McDonald) until he retired in 1944 because, under nepotism rules, one of the two would have had to resign from the faculty had they married. Nepotism rules, which were not dropped until the 1970s, often had the effect of inhibiting women’s careers. Such is the case of Phoebe Waterman. The first women to earn PhDs in astronomy at Berkeley were undergraduates at women’s colleges, Vassar and Wellesley, where women students avoided comparisons with men.