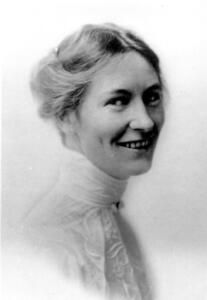 Phoebe Waterman Haas was one of the two women who earned the first doctoral degrees in astronomy on the same day in 1913 and  each matriculated at Berkeley from women’s colleges where they were taught by women faculty. Waterman was the daughter of a US Army cavalry officer. While visiting her father in 1900 in Cuba, she was excited to observe a partial solar eclipse. Waterman studied astronomy at Vassar College where she earned a BS and an MS in astronomy in 1905 and 1906. She wrote her MS thesis on “The Definitive Orbit of Comet 1880.” Waterman studied with Professor Caroline Furness, a Columbia PhD, who became her lifelong mentor. Before being accepted to Berkeley’s graduate program, Waterman worked as for two years a computer at the Mount Wilson Laboratory, near Pasadena, supervised by acclaimed astronomers like George Ellery Hale and J. C. Kapteyn. She chafed at her assigned tasks of classification of photographic plates and reduction of stellar spectra and found little chance for independent work.

Realizing she needed advanced training to achieve her ambition to make her own observations, she applied for graduate study at Berkeley. Once enrolled, she commented about the difference between Vassar and Berkeley, and the new experience of competing with men. Waterman wrote to Furness: “… they give a woman the same work as the men. I am getting used to the different standard a little—for it surely is a different one, and quite a different thing from measuring up against women.”  Armin Otto Leuschner, who built Berkeley’s astronomy program, described Waterman as “one of the most unusually well-equipped women we have ever had at Berkeley. She is brilliant, quick and accurate and disposes of her work with promptness and accuracy.” [1] She wrote a PhD thesis on “The Visual Region of the Spectrum of the Brighter Class A Stars.” Waterman is believed to be the first woman astronomer to conduct her own telescopic research instead of relying on the observation logbooks of others. Alongside her fellow students, she conducted research at the Lick Observatory; records of her observations appear in the Lick Observatory Archives. [2] After graduation, Phoebe Waterman and her roommate, Estelle Glancy, accepted positions at the Argentine National Observatory in Cordoba, an outpost of the Lick Observatory, directed by the American Charles Perrine. Fate intervened; during the voyage to Argentina. Waterman fell in love with an American businessman, Otto Haas.  Once in Cordoba, she found the work to be routine and boring, and soon returned home to marry Haas. Like Berkeley mathematician Emma Lehmer, she gave up an independent career as a promising astronomer to marry and raise a family.  Nonetheless, Haas bought a telescope in 1927 and recommenced observational astronomy for several years. When her two sons were older, she tried to reenter the field but reported she was discouraged by Berkeley faculty. At the suggestion of her Vassar mentor, Caroline Furness, Haas volunteered to observe variable stars for the American Association of Variable Star Observers at Harvard Observatory (AAVSO). As a citizen scientist Haas continued involvement in astronomy through her scientific observations and calculations.  Haas submitted 338 observations to AAVSO between 1928 and 1933.  In 1941 she wrote “Someday I hope I can join in again…. There is nothing I enjoy more than an evening out with my telescope, the thrill of finding a faint prick of light where last time I looked, I could see nothing, then seeing that point brighten. I’ll be at it again yet!” [3]

Although Haas sustained her passion for astronomy as an observer and volunteer computer, she never attained a professional position. In 1945, after World War II, Phoebe and Otto Haas founded the Phoebe Waterman Foundation to help children who had lost fathers in the war, and to support educational institutions. Her grandson, Thomas Haas, donated $6 million in 2013 to support science education through the Phoebe Waterman Haas Public Observatory at the National Air and Space Museum.  As a result, Phoebe Waterman Haas is far better known than her classmate Estelle Glancy.